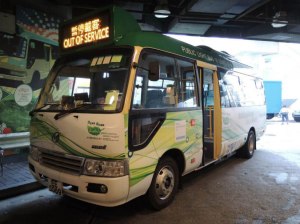 A director of a bankrupt minibus firm who received an estimated HK$2.5 million from the government for two hybrid bus vehicles never completed mandatory public trial reporting, failing a key requirement of the subsidy scheme, with the government blaming personnel changes in its own independent auditing teams for the missing reports.

Chit Fai Motors Company, which shuttered its garage and four minibus routes last month on a slowdown in business, operated two hybrid buses under the government’s Pilot Green Transport Fund, according to photos on its Facebook page. A government source says the licence plates match subsidies won by Teamwise Corporation Limited, a company run by racing driver and minibus mogul Terence Tse Kin-leung and Chit Fai’s parent CFM Management Limited. Teamwise won the government subsidy for two Dongfeng Gemini buses in June 2012, says the government, with up to 50% of the cost covered by the government’s scheme.

A condition of EPD’s Pilot Green Transport Fund is that operators submit detailed information for six-monthly trial reports, checked by a third-party assessor, for public scrutiny – but in the case of the Teamwise purchase for Chit Fai, no such reports were ever produced. According to an EPD spokesman, the Teamwise reports are “yet to be available”.

“There have been some personnel changes to the assessor,” says the spokesman. The assessor in question, Jockey Club Heavy Vehicle Emissions Testing and Research (JCEC), had staffing issues and “still needs more time to recruit staff for replacement and follow-up on the analysis of the data,” he says.

But the Teamwise trial started in 2014 and finished in 2016, according to a source, which would indicate the Teamwise reports – three interims and one final – are very long overdue. Under the terms of agreement, subsidised companies are only required to keep records of fuel and maintenance for inspection for six months after the trial ends.

Teamwise is not the only subsidy project to be missing reports: only 38 completed reports are available out of 83 completed trials. And only two of six firms given a total of HK$12 million in subsidies in the same batch as Teamwise completed trial reports: Kwoon Chung Limited, in August 2016 (16 months after its trial finished) and Hong Kong Metropolitan Bus Limited, in February 2017 (13 months after its trial finished), both of those completed reports signed off by EPD’s other independent assessor, The Hong Kong Polytechnic University.

The missing reports may spare red faces at manufacturer Dongfeng – its hybrid buses were widely disliked by those who used them under the EPD subsidy scheme.

Hong Kong Metropolitan Bus found its Dongfeng bus had a downtime of 230 days out of the 730 days in the trial period, a utilisation rate of 68% against 95% for its diesel counterpart. The machine weighed significantly more: 7 tonnes against 4.8 tonnes for a typical diesel minibus, giving it a lower fuel economy, according to another trial report.

The machines also fared poorly in summer: “The batteries of the Hybrid Vehicle usually reached 50°C or above during the summer period, and the battery cooling system was not able to effectively lower down its temperature,” wrote assessors from the Jockey Club Heavy Vehicle Emissions Testing and Research Centre in a report on Big Three’s Dongfeng hybrid minibus.