According to Chan, representing the insurance sector, people who had “not sustained any injury in traffic accidents” had received benefits from TAVA “by pretending to be feeling unwell” and falsely procuring medical certificates.

TAVA is a non-means-tested social welfare initiative that provides speedy financial assistance to injured victims of road traffic accidents, regardless of fault.  But Chan said the system is being abused, and he raised the issue of professional drivers benefitting illegally from the scheme. In a written reply to Chan, Secretary for Labour and Welfare Dr Law Chi-kwong said the government has found only one case of suspected fraud in the past five years.

Chan also says members of the insurance sector have complained about touting and champerty – illegal inducements to finance lawsuits – around the premises of TAVA. “Organisations … have sent persons station [sic] outside the office… to persuade TAVA Scheme applicants to entrust their cases to the solicitors designated by such organisations, and arrange them to apply for legal aid for instituting legal proceedings to make claims for compensation,” he says. 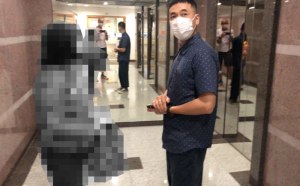 This woman (left) visited the TAVA office to settle a claim – as she left, a law clerk approached her in the lift lobby

Transit Jam visited the TAVA office in Wan Chai today, posing as an accident victim. One law firm has offices at the end of a corridor facing the exit of the TAVA office, with a legal clerk stationed watching the claims office exit. Within seconds of leaving TAVA, we were approached by the legal clerk, who said he could secure compensation several times higher than that offered by TAVA and that the third-party insurance would cover not only the compensation but also all legal costs.

When we declined a more in-depth discussion in the lawyers’ offices, the clerk shifted attention to another woman who had just left the TAVA offices and was waiting for a lift. Later, outside the office building, the woman said the clerk had offered legal services. She said she had been quite satisfied with TAVA’s service, and the claim had been processed quickly. But she also said she was interested to know if she could get more compensation through a lawyer.

The government said it doesn’t maintain statistics in respect of suspected champerty cases relating to traffic accidents.  Secretary Law said the government had been strengthening public awareness against such illegal acts through broadcasts on TV and radio. Signs at the TAVA offices also warn visitors to seek professional legal advice or assistance from the Law Society or Legal Aid.

Chan’s attack on the behalf of the insurance industry came as LegCo passed a landmark bill reducing profits tax for general insurance by 50%. The government aims to launch the concessions by the end of this year or early 2021.