Thieves are targeting reconditioned bikes given to refugee ethnic minorities because refugees are unlikely to report such theft to the police, according to a manager at charity foundation Crossroads.

Volunteer workshop manager Mario da Silva estimates as many as 80% of the refurbished bikes given to refugees in the New Territories are stolen, leaving refugees without transport.

Crossroads gives reconditioned bikes to people with referral letters from the Social Welfare Department. Hong Kong’s most vulnerable residents can claim appliances, furniture and bicycles this way – but with a limit to how many times they can claim, says da Silva.

“We should only process requests for a reconditioned bike once a year, unless they have a proper police report case number,” says da Silva. “But refugees don’t like contact with the police.”

The fear of contacting the authorities not only means that the refugees can’t claim a new bike when theirs is stolen, but also makes them a target. “It seems that thieves watch for these [ethnic minority] bike owners so there’s no police follow up and no fear of capture,” says da Silva.

Social worker Jeffrey Andrews, who took part in the recent LegCo primaries as a candidate for Kowloon West, says it’s a real problem. “One of my clients […] got his bike stolen, but didn’t go to the police because he feared he’d be asked how he got the money to buy a bike in the first place, as it’s illegal for refugees to work,” he says. “They just fear they won’t be taken seriously.”

Crossroads says it’s reluctant to turn down any request, as bikes are a transport lifeline for these refugees, who often can’t afford even public transport. Da Silva says he gives his clients free cable locks with their bikes, but while he recommends they buy chains and padlocks for extra security they often stick with the cable locks, to save money. “These get cut and so they lose their bikes to thieves,” he says. 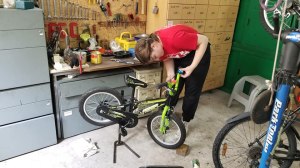 “It’s a vicious loop,” says da Silva. “We overhaul, we give away, they get stolen again. It’s a lot of work to overhaul a rusty old bike only to have it stolen.”

Police run undercover operations in bike-theft hotspots such as outside busy train stations, but would not comment on specific refugee bike theft issues.

As well as helping locals in need, Crossroads also sends container-loads of repaired and overhauled bikes to Africa – the charity relies on volunteer mechanics like da Silva, together with donations of old bikes from large housing estate clearances, such as Discovery Bay, and bicycle components from donors or other bike shops.