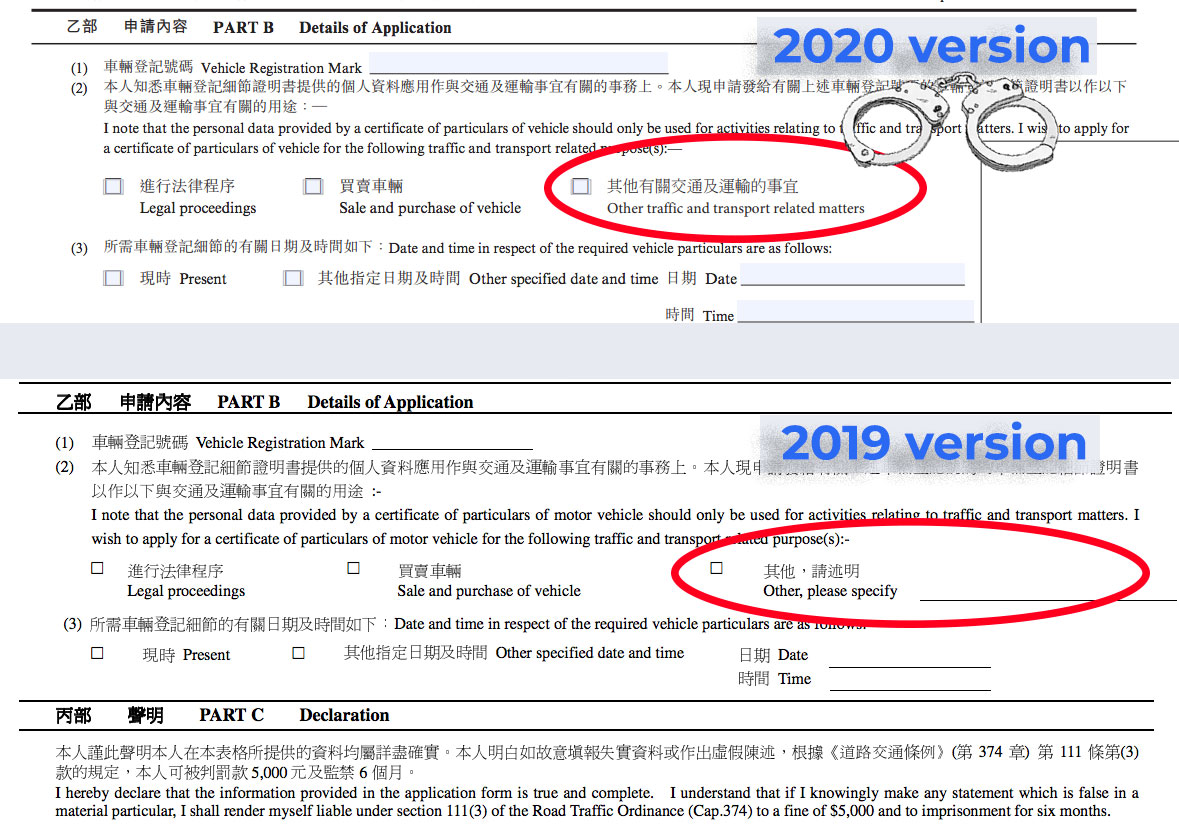 Police arrested a journalist today under a relatively new mechanism which forces journalists to restrict their use of publicly-available vehicle information to transport-related matters or face legal consequences.

Reporter Choy Yuk-ling, 37, is accused of “making a false statements” to the Transport Department (TD) in May and June this year, police say, as she sought information relating to licence plates as part of an investigation into triad activities and questions on police operations surrounding the Yuen Long attacks on 31 July 2019. Choy has been charged with two counts of the charge and will appear in Fanling Magistrates Court on 10 November.

Under TD rules, TD vehicle information can only be sought for “traffic and transport matters”, and users are required to declare one of three purposes when applying for data: “legal proceedings”, “sale and purchase of vehicle” or “Other traffic and transport related matters”.

Using the data for any other purpose, as Choy is alleged to have done as part of her filmmaking, is not necessarily in itself illegal, but would constitute making a false statement on the TD form, an offence under the Road Traffic Ordinance and liable to a HK$5,000 fine and six months jail.

However, older versions of the form (update: as of 4 November, this link has been disabled) were less restrictive: while the form reminded users to limit their purpose to transport-related matters, it gave journalists and investigators an option to choose “Other” for their purpose, and offered space to write in other purposes, thereby helping users avoid making false statements if they wished to use the data for non-transport-related work. 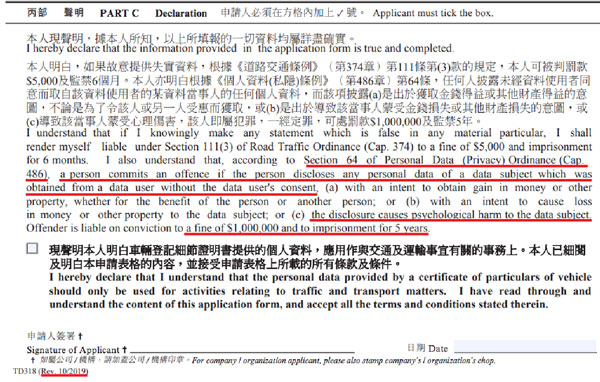 The form changed on 31 October 2019, its first significant overhaul since 2009. The new form also poses significantly more serious implications under privacy laws, warning users they may face fines of up to HK$1 million and five years in jail for causing “psychological harm” or other to those whose data they seek, or for revealing information without the owner’s consent.

TD would not comment on the change in form or on how many people had been charged with this offence since the form was updated, and referred enquiries to the police.

Police say they do not keep statistics on how many people have been charged with such an offence.

A police spokesman says the arrest was triggered by a complaint from a member of the public that “someone publicly reported relevant information about the car owner on a documentary film, suspected of infringing on personal privacy.”

“If false information is provided during the application process, the applicant may commit a criminal offence,” says the spokesman.

A lawyer close to the subject says journalists could cross out the “other traffic and transport related matters” on the form and write in their purpose to avoid making a false statement. “But then the application would probably be rejected,” he says.