Analogue Holdings director William Chan Fu-keung, 72, will be joined by lawmaker Tony Tse Wai-cheun, 66, and lawmaker Aron Kwok Wai-keung, 42, as new directors at the city’s redevelopment body from December 1. Evan Auyang Chi-chun, 49, Chairman of Civic Exchange and a board member at Sun Hun Kai Properties, keeps his URA board seat for another three years.

Sources say Chan’s links to Analogue, where he has been an independent non-executive director since 2015, may raise eyebrows in urban planning circles. Analogue, which won government contracts worth HK$1.2 billion in 2018/2019, was founded by Justice Secretary (SJ) Teresa Cheng Yeuk-wah’s husband Otto Poon, and counts SJ herself as a substantial shareholder – a fact only revealed by listing documents when Analogue went public on the Hong Kong stock exchange in 2019.

The firm was investigated in late 2019 for alleged competition breaches, although no case has been brought to trial. Meanwhile Otto Poon himself was convicted and fined for illegal structures at his own home in Hong Kong’s most high-profile “unauthorised building works” case. There were many calls for Cheng to resign when reporters found alleged illegal structures around her and her husband’s luxury homes in Tuen Mun, just a few days after her appointment as the city’s justice chief, in January 2018.

The second appointee, FTU lawmaker Aron Kwok, recently made headlines after being accused of assault by former lawmaker Ray Chan Chi-chuen. According to Chan, Kwok dragged him from the LegCo chamber during a heated protest in May. Kwok, meanwhile, defended his actions against Chan, saying he was trying to protect security guards against “people getting radical”. Chan brought a private prosecution against Kwok, a case which SJ took over and then dropped on 9 November.

Also newly appointed to the URA board is lawmaker Tony Tse, who sits on the Independent Police Complaints Council, the Harbourfront Commission, the HKSAR Standing Committee on Disciplined Services Salaries and Conditions of Service and the HKSAR Property Management Services Authority, as well as being on Hong Kong’s Chief Executive election committee. Tse is also a member of the Chinese People’s Political Consultative Conference (CPPCC). 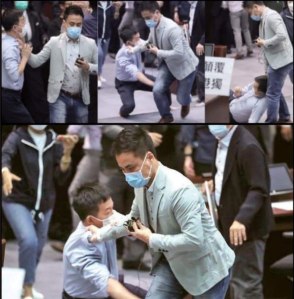 Aron Kwok pictured dragging Ray Chan from the council chamber in May this year: the Secretary of Justice later snuffed out Chan’s private proseuction

The Urban Renewal Authority is a quasi-governmental profit-making redevelopment agency that aims to improve living conditions in older districts by tearing down old blocks and building new commercial and residential skyscrapers.

“The members of the Board come from a wide spectrum of professions and sectors in the community with extensive experience and expertise,” says URA chairman Chow Chung-kong. “Their involvement will support the URA in fulfilling the important mission of taking forward urban renewal in Hong Kong.”