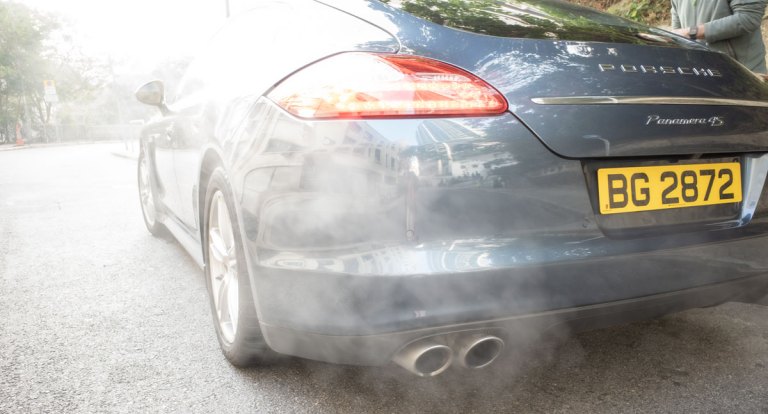 A Porsche owner returns to his idling vehicle – under the law, such an offence could attract a $320 ticket, but authorities have proved sluggish at enforcing the environmental code

After giving just three tickets a month against idling engines in a decade, the government today said it was giving up on the impotent idling engine law, claiming it would no longer be necessary in the “zero emissions” landscape.

Despite very low prosecution rates, Owin Fung, Deputy Director of Environmental Protection, said the government had previously been “putting resources into enforcing the law”, but suggested this was now redundant.

“I don’t think we will now put a lot of resources into this particular enforcement, as we are moving towards a zero emissions stage, so we hope that more and more vehicles will have low emissions, then we don’t need these kinds of enforcement,” he said at a press conference on the government’s new Clean Air Plan.

Fung said the department would now focus on tightening emissions standards on all vehicles. “Basically we will put sufficient resources to do those enforcement jobs,” he said.

The idling engine law came into force in December 2011 – since then, traffic wardens and environmental protection officers have made an average of two inspections a day and given just 40 of the rare $320 tickets each year.

According to a police source, the law is difficult to enforce, as it requires an official to video record the engine idling for at least three minutes. As drivers can easily spot officials timing them, they will often switch off their engines or drive off before the three minutes is up.