The location of the crash in which a man died after driving into an illegally parked container trailer. Illegal parking is rife through the industrial estate, which serves Nestle and China Dyeing among others

A 60-year-old man died in hospital yesterday morning after crashing his private car into an illegally parked container trailer on Wang Lok Street in Yuen Long.

Mr Lam was driving north through the major Yuen Long industrial estate, home to Nestle Hong Kong and China Dyeing, when the crash occurred. Police say he struck the parked container trailer and was trapped underneath. He was rushed to Pok Oi Hospital, unconscious, and died within an hour of the crash.

Although some metered truck parking is allowed on the street further south, most of the street through the industrial estate is lined with illegally parked container trucks or trailers on either side.

Police say they are investigating. 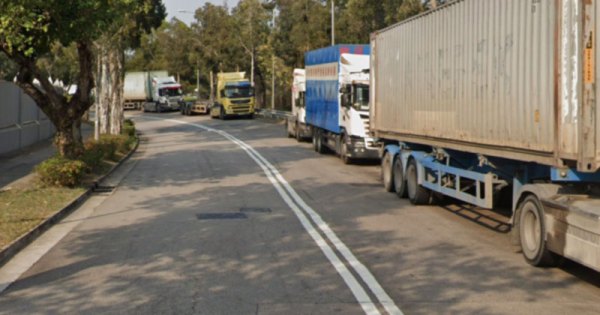 Illegal truck parking is rife on Wang Lok Street, even on the narrower two-lane section