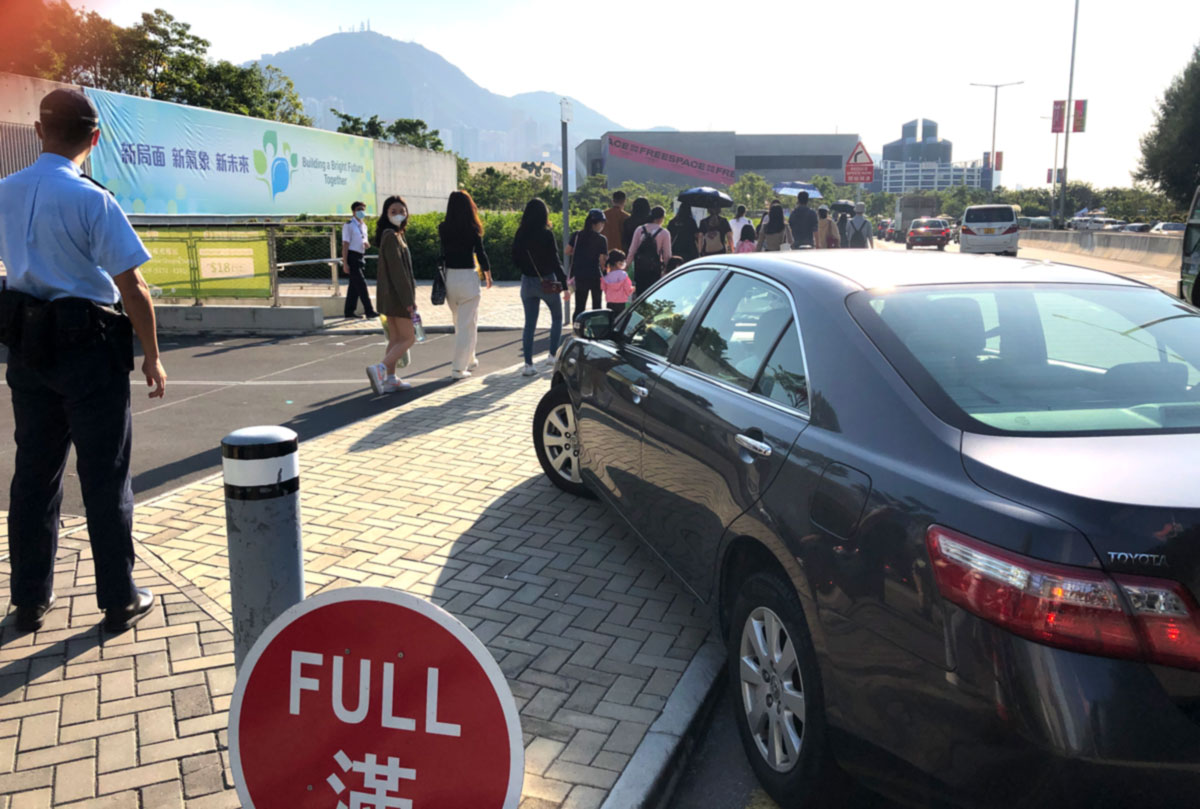 The new car park at Hong Kong landmark M+ fills up quickly at the weekend, with almost half of lawn visitors saying they drove to the venue 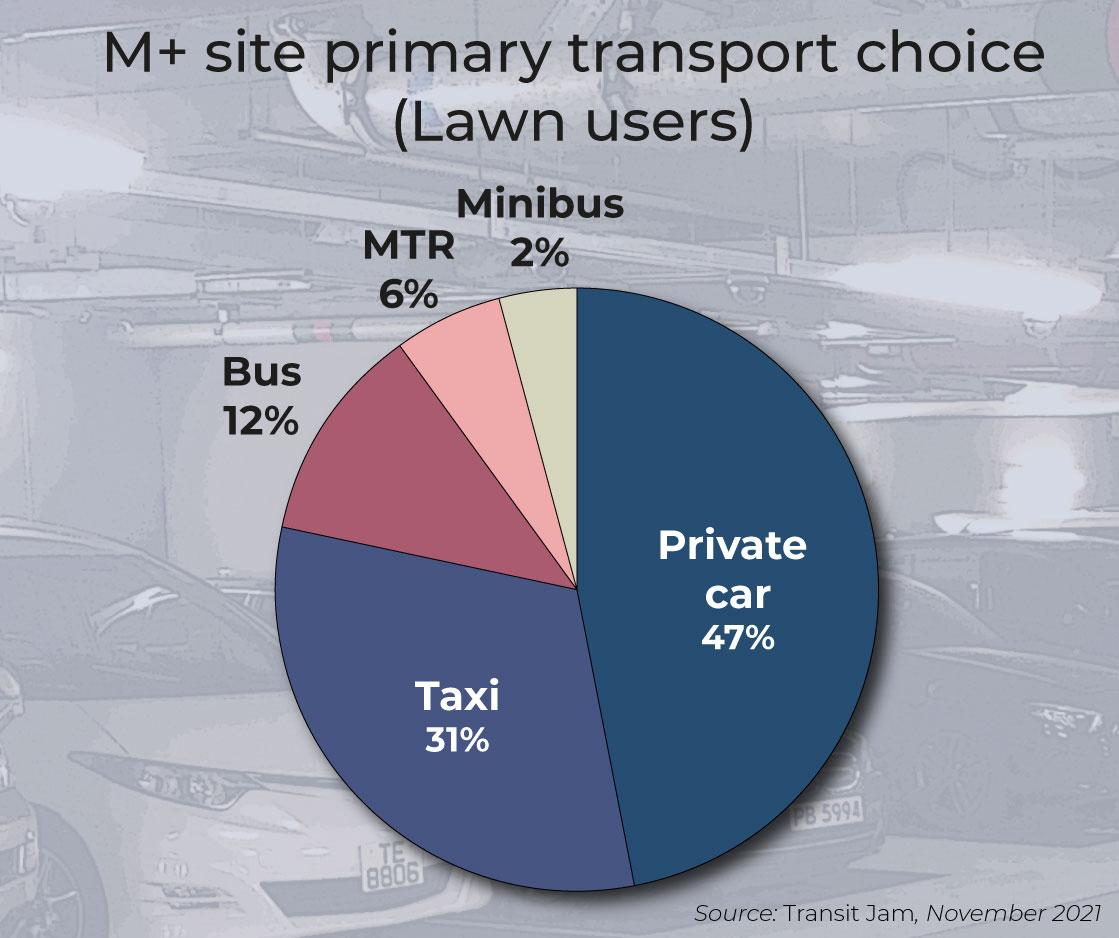 Almost half of lawn users polled today at the complex said they arrived by private car, with another third taking taxis. That meant just 22% using bus, MTR or minibus and no lawn users arriving by foot or bicycle.

For the complex as a whole, active travel fared better, with around 8% of visitors to the lawn, seafront and M+ museum arriving on foot – either walking or using kick-scooters. But private cars still accounted for 45% of overall visitors, and taxis 26% when the seafront and M+ were included in the transport statistics.

The findings contrast with promises made by the West Kowloon Cultural District (WKCD) in funding discussions. In 2015, WKCD told LegCo that only around 8% of visitors would use private cars, according to its consultant’s study.

In fact, that estimate is out by a factor of five or six, based on the survey this weekend, leading to questions on the validity of the WKCD Traffic Impact Assessment.

In 2020, lawmakers questioned whether the provision of over 2,000 car parking spaces in WKCD was “consistent with the vehicle-free design concept” promised by WKCD in its funding requests, and expressed concern that such a large number of car parking spaces would aggravate traffic congestion in the area. 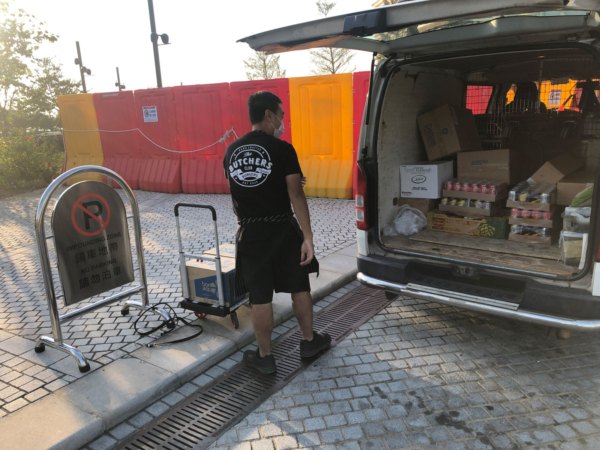 The number of cars in the new district is already causing problems: tempers have been fraying around car parking at M+ over the last few weeks, with a new “Zone F” car park full before lunch and long queues of cars being corralled by frustrated police.

Lines of illegally parked cars tailed back all the way to Austin Station and Canton Road. And vans supplying food kiosks have been seen illegally unloading in minibus stands, leading to speculation that WKCD did not properly provision loading for businesses operating within the park.

For its part, WKCD had already promised to investigate better public transport, walking and marine links: but a new Water Taxi service plying the complex runs just twice a week and walking to the site from either Tsim Sha Tsui or Kowloon Station requires navigating complex footbridges or fast road segments without pavements.

Nor is it legally possible to approach M+ by bicycle, with cyclists facing obstacles including highways, “no cycling” signs on underpasses and MTR premises requiring riders dismount and walk. There are no obvious cycling parking bays or stands around the complex or car park. 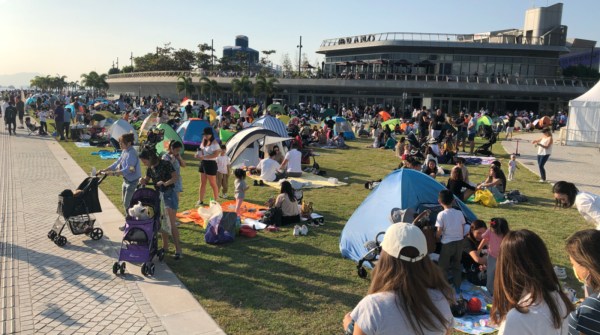 The lawn at M+ is a key part of the newly developed complex. Graham Tier, District Facility Services, West Kowloon Cultural District said on LinkedIn he’d set his team the goal “of providing our Park guests the best lawn in Hong Kong”. While Tier then said the team had “some way to go”, the lawn has proved an instant hit for families, with many bringing tents, dogs and children to play and enjoy the sun and sea breezes.

Many of the lawn users polled cited “convenience” as the reason they chose a private car to visit the complex. “It’s just easier with the kids and the dog and the tent and the food,” said one, while many others said their car was faster than public transport.

Visitors polled today came from all over the city, with over half of lawn users coming from New Territories, a third from Hong Kong Island and just 7% from neighbouring Kowloon.